Making a clean shot with your rifle is not only paramount to a solid sight-in process, but it's also what puts backstraps in the freezer and makes shooting fun. When you're hitting what you're aiming at, you’ll enjoy shooting more and do it more often. Few offer better or simpler advice for how to do this than the former leader of the Army's legendary Shadow sniper team, Jim Gilliland. In 2015, he made a lethal shot from a distance of more than three-quarters of a mile with his 7.62mm rifle. In addition to Gilliland's sniper status, he is also an accomplished hunter and a practical guy who knows how to focus on what really matters.

Before we dive in, however, he’s quick to point out that his checklist doesn't have one word about breathing. Here's why.

"Breathing and rifle shooting is a touchy subject," he says. "You need oxygenated blood for your body to function correctly. Generally, speaking though, teaching breathing as part of the rifle shooting process takes focus away from the process of shooting."

Gilliland said it’s scientifically proven that a human can only focus perfectly on one thing at a time, and if you're focused on breathing, this takes away from focusing on where the sights are on the target and pulling the trigger without moving those sights.

"If you come into perfect focus on your target through your sight, your brain will take over for you and heart rate will slow, and your breathing cycles will shallow out. If your body needs oxygen, it will tell you. Your eyes will tremble a bit, or things will go in and out of focus. If that happens, come off the scope, get a quick breath and get right back into the optic."

Shooting at extreme range requires a special kind of bullet. Our Target Match projectiles have what it takes to go the distance thanks to a low drag profile, high ballistic coefficient, precision jacket and consistent hollow point. 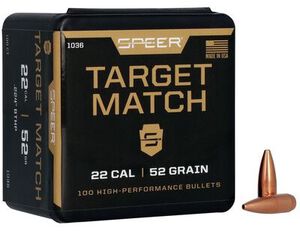 A good shot isn’t magic. It’s the result of a series of relatively simple steps. Do each one perfectly, and move to the next until you’ve executed the shot.

That’s it—a simple collection of steps and concepts that every shooter can master with practice. The key is not overcomplicating the process. Develop a routine based on Gilliland’s advice and practice until it becomes muscle memory. Do this, and not only will you become more proficient behind your rifle, but your groups will shrink, and so will the amount of space in your freezer.