CASE: Although there are many centerfire handgun cartridges available, they all fall into two basic design categories. Cartridges used in revolvers or single-shot pistols are generally rimmed, which means the case head has a rim that extends beyond the case wall. Common revolver calibers are 38 Special, 357 Magnum and 44 Magnum. Semi-automatic handguns generally utilize a rimless cartridge, which features a head that does not extend beyond the diameter of the case walls. An extractor groove is cut into the base to enable the firearm’s extractor to grip the cartridge. Common semi-automatic calibers include 9mm Luger, 40 S&W and 45 Auto. Speer offers loaded handgun rounds in cartridges from 25 Auto to 45 Auto, and component bullets ranging from 25 to 50 caliber.

BULLET: As with all ammunition, the projectile itself plays a tremendous role in how a given pistol round performs and how it should be used. That’s why manufacturers like Speer have developed a vast array of bullets, each designed around a specific purpose.

TARGET BULLETS: Ammunition loaded with full metal jacket (FMJ) bullets is often referred to as ball ammunition. It’s designed to feed reliably in semi-automatic handguns, but the bullets do not expand when they hit targets. Speer TMJ bullets take the FMJ design further with a copper jacket that surrounds the lead core. They’re generally used for indoor ranges because they reduce the amount of airborne lead. Wadcutters and semi-wadcutters are designed to cut clean holes in paper targets. Lower velocity rounds also can utilize plain lead round nose bullets that have no jacket.

SELF-DEFENSE: It is important to carry a quality bullet that is designed to neutralize a threat as quickly as possible. While a simple jacketed hollow point in common defensive calibers can be effective, bullets like Gold Dot, Gold Dot G2 and Gold Dot Carry Gun deliver much more consistent, reliable results.

Speer’s selection of self-defense bullets were all originally developed for law enforcement and tested to perform using the FBI Protocol. This rigorous series of tests evaluate a bullet’s expansion, penetration and weight retention when fired through a series of barriers. FBI Test Protocol requires the use of calibrated 10 percent ballistic gelatin. Bullets are scored based on the following criteria

The ammunition test protocol is composed of six test events shot at 10 feet. 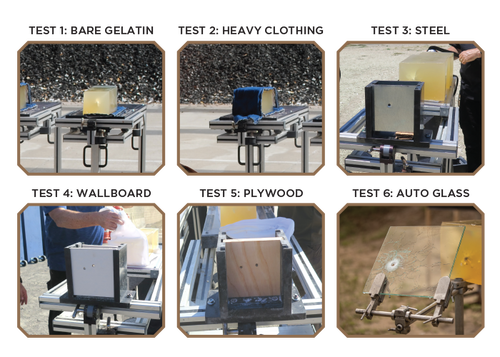