How Often Should I Shoot?

I heard the question after a seminar on long-range rifle accuracy. It deserved an answer: “How often should I shoot my rifle or pistol?” The gentleman on stage looked gut-shot. His jaw fell open slightly, and he scrambled to talk around the question. Why? As simple as the question was, he’d never been asked it and didn’t have a prepared answer.

I went looking for the truth, and in the world of handguns and rifles, I greatly value a pair of opinions. When former Army sniper Jim Gilliland and ex-Marine and current SWAT Team Leader George Walker talk, I tune a close ear, and so should you.

I caught Walker just as he was stepping into a patrol car to train a rookie, and he was quick to point out the obvious—the more practice you put in, the more proficient you will be. But of course, he went much deeper.

“Ammo is an issue right now,” he says. “I like to see new handgun owners get to the range as often as possible, and I like to see those who have been shooting for years get out a couple of times per week. Ammo is scarce, though, so you have to find a way to work around that.”

Dry firing is simply shooting the handgun without ammunition in the chamber or magazine. The great thing about dry firing is you can do it anywhere, and Walker recommends building a training journal that will help maximize both dry firing and precious range time.

“If you get creative, you can work daily or every other day on dry firing drills,” he says. “You can work on your draw and press out, sight alignment, trigger press, magazine loads, re-holstering, and the list goes on. The great thing about dry-firing drills is they boost muscle memory. Take them seriously. There doesn't have to be a bang at the end for you to get better at a task.”

Walker also notes that the training log should be used to plan a firing day at the range. With the demand for ammo up, handgun rounds are expensive and hard to come by. He recommends planning live-fire sessions centered around 25 rounds and not 50 or 100.

“Show up at the range like you would show up at the gym—with a plan,” he says. “You can make 25 rounds go a long way if those rounds are focused and you mix some dry-firing drills.”

Of course, Gilliland can operate any firearm on earth—handgun, rifle or anything else—but I wanted to pick his brain about rifle shooting. He points out that how much time a person spends with a rifle stock pressed against their shoulder depends heavily on their goals. Naturally, competition shooters will practice more than those who head to the deer woods once or twice a year. However, Gilliland notes that it should be every shooter's goal to be as proficient with their rifle as possible, and the only way is to spend a lot of time with that rifle.

“You can’t be completely confident doing something until you have mastered the basics and gotten to the point where you feel very comfortable,” he says. “However, comfortable should never mean complacent.”

Our original Gold Dot bullet features a pressure-formed lead core that’s bonded to an extremely uniform jacket a single atom at a time. This virtually eliminates separation on impact for more retained weight and penetration to crucial depths. 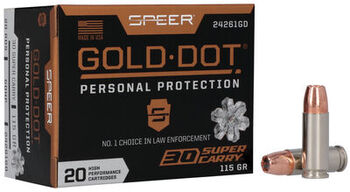 Gilliland notes that those who enjoy plinking or shooting their rifles with family and friends would have a different mindset than those training for competition or the hunt of a lifetime.

“Safety is always first,” he says. “It’s hard to be safe if you haven’t mastered the basics of shooting and your firearm. Every shooter should learn their firearm inside and out and practice safe shooting. When you can do this, you can tailor your shooting sessions—how often and how rigorous—to meet your personal goals.”

Gilliland sees people shoot for different reasons all the time. Someone who’s drawn a coveted once-in-a-lifetime western tag where the shot could be long will train differently than a hunter who is preparing to head to the same deer stand he’s been hunting for 20 years.

“It’s all relative,” he says. “The key is identifying your goal and then going after that goal with everything you have, and above all, range sessions should mimic what you want to accomplish in real life. Don't put a limit on range time. It's always a good thing, but realistically, most can't go every single day. When you do get to go, make the most of it. Proper planning ahead of time will boost your enjoyment and help you conquer your goals."