Grab Life With Both Hands

Listen to interviews of citizens who were forced to use their firearm and lived to tell about it, and a common thread becomes clear. Most will note it happened fast, and not in any way, shape or form they had expected.

Self-defense situations become chaotic very, very quick. We all have a dominant hand, and most of us train regularly with that hand, but what happens when you need to fight with your non-dominant one? Can you do it? More importantly, can you do it safely, quickly and accurately?

The Power Of Versatility

Speer’s Technical Lead in Law Enforcement Ammunition, Johann Boden, notes the importance of being versatile and having balance.

“You just don’t know how it’s all going to go down,” Boden says. “Most everyone trains with two hands on the firearm, and most with their dominant hand controlling it. What happens when they have to sweep a child out of the way?”

He is quick to add that most every person will use their dominant hand to move a child or an object such as a door out of the way. They will need to fight one-handed, and most of the time, the hand they fight with will be their non-dominant one because the dominant hand is being used to sweep. You have to prepare and practice for situations such as this.

“We see it all the time,” says Boden. “A person has to side-sweep a loved one out of the way and then start fighting. Then there are those times when a person is holding a phone or walking a dog. Things happen. You have to be able to shoot with one hand, and you need to be able to operate your firearm efficiently with both your left and right. This takes lots of training.”

It’s also important to know that more than 50 percent of self-defense situations are reactive and not active. This simply means, in many cases, the person being attacked didn’t initiate it. They have been shot at, slashed at with a knife or had hands put on them. They are operating from the reactive. This means the person being attacked will raise something to block a blow, and that something is typically the dominant arm. This is yet another reason to know how to fight one-handed and with both the left and right.

“You have to train for it,” Boden says. “You will be in a stressful situation. We see it all the time in training environments and in competition shooting. As soon as a person has the intent to use a weapon one-handed, the other hand typically gets placed in danger. A person reaches for a door as they are pressing out and the muzzle of the firearm is pointing right at the hand on the door handle. You have to learn, regardless of what hand you’re fighting with, to get the other hand back and up against the chest, throat or face area as soon as possible. This can only be accomplished through practice.”

Another great asset to being able to fight with both hands is operating from cover. If you are forced to operate around the left side of cover and you’re a right-hander, there is no good way to engage a target, return fire or even look without exposing the upper side of your left torso. If you can switch to your left-hand and left eye competently, you can fight while staying virtually invisible.

But it takes practice, time and effort. Invest in them now and reap the rewards should the world throw you a curve and put you in the fight of your life. 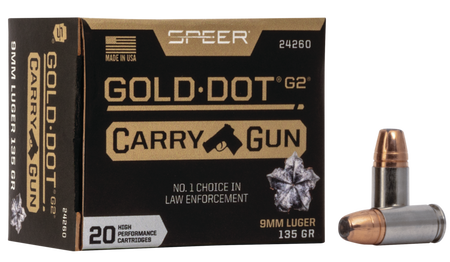 Subcompact confidence. This new load uses our Gold Dot G2 bullet, but it’s been adapted to feed, shoot and perform better on impact through compact concealed handguns. It’s all in the nose. Instead of a large hollow-point cavity, it has a shallow dish filled with a high-performance elastomer.