LEWISTON, Idaho - January 29, 2020 - Gold Dot, a leader in terminal performance from Speer, has undergone a design modification for compact and subcompact handguns. The result is a new product featuring an optimized G2 bullet design. The full lineup is fittingly named CarryGun and will be available in 9mm Luger 135-grain, 40 S&W 165-grain and 45 Auto +P 200-grain.

Gold Dot G2 is a recent evolution from original Gold Dot, aimed at achieving better FBI-protocol test scores than its predecessor. Both the standard Gold Dot and the new Gold Dot G2 bullets utilize UNICOR construction, but the G2’s unique design is an evolutionary step forward in duty bullet protocol performance. Rather than the traditional hollow point design of the Gold Dot, the G2 bullet features a shallow cavity in the nose of the bullet that is filled with durable elastomer. This prevents barrier materials from filling the nose cavity of the bullet which, in turn, inhibits expansion. This provides more consistent performance through tough barriers like wood and steel.

Speer Gold Dot CarryGun offers not only the best bullet for self-defense but adds features that ensure this ammunition will perform reliably under any conditions. That begins with the use of quality nickel-plated cases that feed reliably. That’s coupled with advanced powders that perform consistently and a sealed CCI primer that are sensitive and reliable. With so many high-end features it’s clear that Speer’s new Gold Dot CarryGun ammunition will help redefine the CarryGun market the same way that the company’s Gold Dot G2 has become the standard for duty pistol performance.

“Gold Dot CarryGun is going to be the highest-scoring protocol round out of a compact gun ever,” he said. “We are seeing really great results shooting it through FBI protocol.”

Most shooters believe that a defensive bullet—any defensive bullet—will perform well in typical self-defense situations. A duty bullet that is designed for and optimized to a full-sized duty pistol simply won’t perform to the same standard from a short-barreled carry or backup gun. By taking the Gold Dot G2 bullet and customizing it to function in short-barreled defense pistols Speer has created a self-defense load that is truly optimized for the guns in which it will be carried.

There’s no room for compromise in a self-defense situation. When lives are on the line you must rely on your self-defense ammo to perform flawlessly, and Speer’s Gold Dot CarryGun does just that.

This new product was announced at the 2020 SHOT Show in Las Vegas, Nevada, January 21-24. New Speer CarryGun is scheduled to ship at the end of January 2020.

Speer ammunition can be found at dealers nationwide or purchased online direct from Speer. 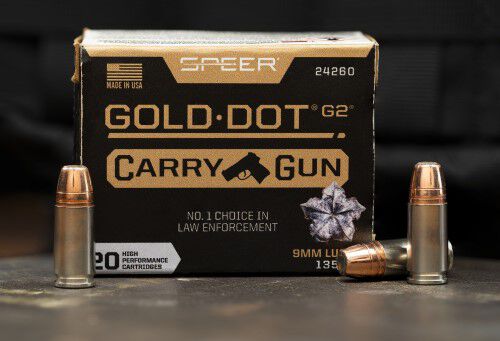